A downloadable game for Windows, macOS, Linux, and Android

With the spectre of fascist civil war haunting the midterm elections in the so-called United States, imminent system collapse is obvious to all. There is no future left but to fight it out in chaos of the streets – or in the latest version of Smash MAGA: Trump Zombie Apocalypse! This expansion continues the timeline into Biden’s neoliberal nightmare with six new action-packed levels: “March Against Dystopia”, “Dualing Protests”, “”Cop Island”, “Bicycle Bomber”, “Civil War”, and “Ancient Future”.  Join the struggle in single-player mode or fight with your friends online against new enemies including police riot trucks, digi-dogs. tanks, Romanesque MAGA LARPers, peace police, and more.

Hordes of brainwashed right-wing extremists have become infected with the Trump Zombie Plague and threaten the free world with fake-news-propagating hate speech. But there is one force that can stop them – anti-fascism! Gamers, rise up and confront the infectious, indoctrinated mobs in Smash MAGA!

Unapologetically anti-fascist, Smash MAGA! Trump Zombie Apocalypse is a politically-charged smash-and-run retro action adventure game (in the style of Smash TV) where you fight right-wing zombies at scenes like the Capitol Hill Riots and other historic events of our time.

So hot that it was banned from Google Play and the App Store!

After the failed coup, the forces of the Trump virus lingered and spread a new wave of propaganda to reanimate the zombified hordes. Grifting ignorance and hate, right-wing chaos agents mainstream the scapegoating of the vulnerable and marginalized, creating an era of stochastic terror. Vigilante assaults on public institutions erodes healthcare and education, the right to abortion was the first to go in a Christian nationalist putsch.

Meanwhile, the Neoliberals wanted to normalize the crises. Content with letting the left drain their resources battling the undead fascists in the streets, the Neolibs triangulate and expand the militarization of the police with automation and hyper-technology to maintain their rule and geopolitical power.

An emergency election is held, and both parties lose. Without a majority or plurality, the internal contradictions prove too great for democracy to hold together the diverging realities. Ubiquitous political violence escalates to larger skirmishes, regional conflicts spread to global theaters. MAGA secedes under a familiar banner and makes the first strike… Civil War returns in the age of nuclear fascism.

ok, actually played some....so, diggin' the vibe so far, runs smoothly, some of the art is pretty fugly but in a way that I think actually helps, not detracts from, the games' overall vibe. gameplay reminds me a bit of 'zombies ate my neighbors'.

my much more substantive critique? needs more weapons. mask gun is cute, but if we're going to be facing hordes of magats, we need an arsenal to do it with, not just the mask gun and slow and underwhelming bricks

edit: ok, well into the (second??? not sure what order if any they're meant to be played in) level I found some twisted tea (lol) and some molotovs so I can cook some bacon but this stuff needs to be frontloaded. also what's an antifa riot power fantasy w/o looting? add more weapons to the levels, but make the player loot shit to get them, like use bricks to smash the windows between you and the weapons-that-are-better-than-bricks

haven't even gotten to the gameplay yet but it's unsettling how perfectly the content of the opening text crawl--which is literally just stating true things that actually happened in real life--perfectly fits the energy and vibe of fungible early 90s SNES beat 'em up titles, all set in their own (different and sometimes weirder) dystopian versions of the early 21st century 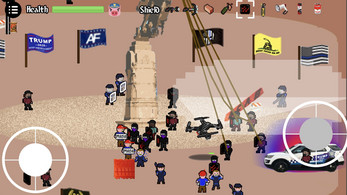 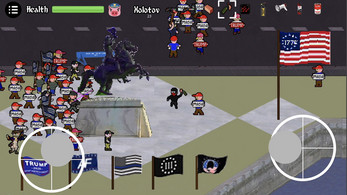 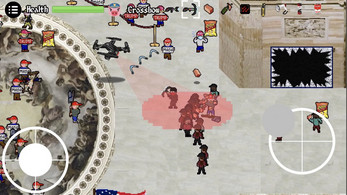 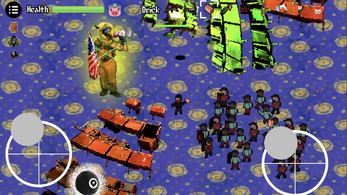